If we had to make a quick choice between evolution and creationism, we would choose creationism.

Here is a simple proof that evolution is not a fact:

Footnote: Multiple studies universally agree that evolutionary science is based on well over 11,000 assumptions.

Theistic evolutionists believe that God used evolution in the process of creating man. Their failure is that they engage in an uncritical acceptance of certain scientific postulates and principles. In other words, they either haven’t done their homework or they haven’t done enough homework. For example, they accept the transitional forms (ape-men, not man-apes) as fact when, in reality, there is not perfect agreement in the scientific community as to the principles supporting the conclusions regarding these so-called transitional forms.

If they existed, extreme man-apes would simply have been man-apes that could be mistaken for human beings.

There is disagreement in the evolutionary scientific community as to the validity of methods used to analyze and evaluate fossils. However, let us assume, for the moment, that the methods are valid. What would this mean?

What it would mean is that there were extinct “man-apes.” What would these man-apes have been. There are two views – evolutionary and data.

The evolutionary view is that the man-apes were transitional forms; that is, life-forms between more ancient apes and man.

The man-apes would have been ancient apes with higher intelligence and more human-looking appearance than modern apes.

The evolutionary view is based on a mixture of data and fantasy. The fantasy is that the man-apes gave birth to human beings. However, no birth fossils (fossils of mothers giving birth to babies) have ever been found.

The data view is always correct because it simply reports the facts.

If fossil analysis/evaluation methodologies are valid, there were ancient apes with higher intelligence and more human-looking appearance than modern apes. There are no birth fossils to prove that they gave birth to human beings.

We have proven that similarity is not proof of evolution (see Evolution’s Great Fallacy). So, what do we have below? Evolutionists would say, “See how the skull evolved over time.” But what we really have is nothing more than a set of skulls of different apes and of a human being lined up by similarity. 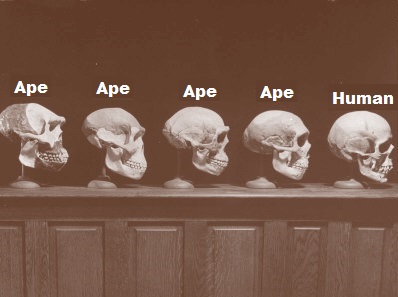 Lined Up By Similarity

To make our point clearer, here are the same skulls lined up by age.

Lined Up By Age

The great fallacy of evolution is:

So, sorry evolutionists but:

Similarity does not prove parentage.

Are the days of Genesis 24-hour days? Well, first, we must define the context of the question. There are two contexts. They are science and truth. Now, remember:

See our discussion elsewhere on the subject of the difference between science and truth.

In terms of science and not truth, the days of Genesis:

The days of Genesis are 24-hour days.

The most important thing to remember on the “day length” question is that:

Science does not disprove the Bible.

Science does disprove the Koran.

Science does disprove every other so-called holy book on the planet.

Monday, March 4, 2013
Dr. Bisconti has now earned his Ph.D. in biology with his thesis "XD: The Theory of Indeterminate Design."